8 Month Pregnant & Dancing: the Bulgarian Travelling Theatre Skrin on How to be Goddesses on Weekdays and Holidays 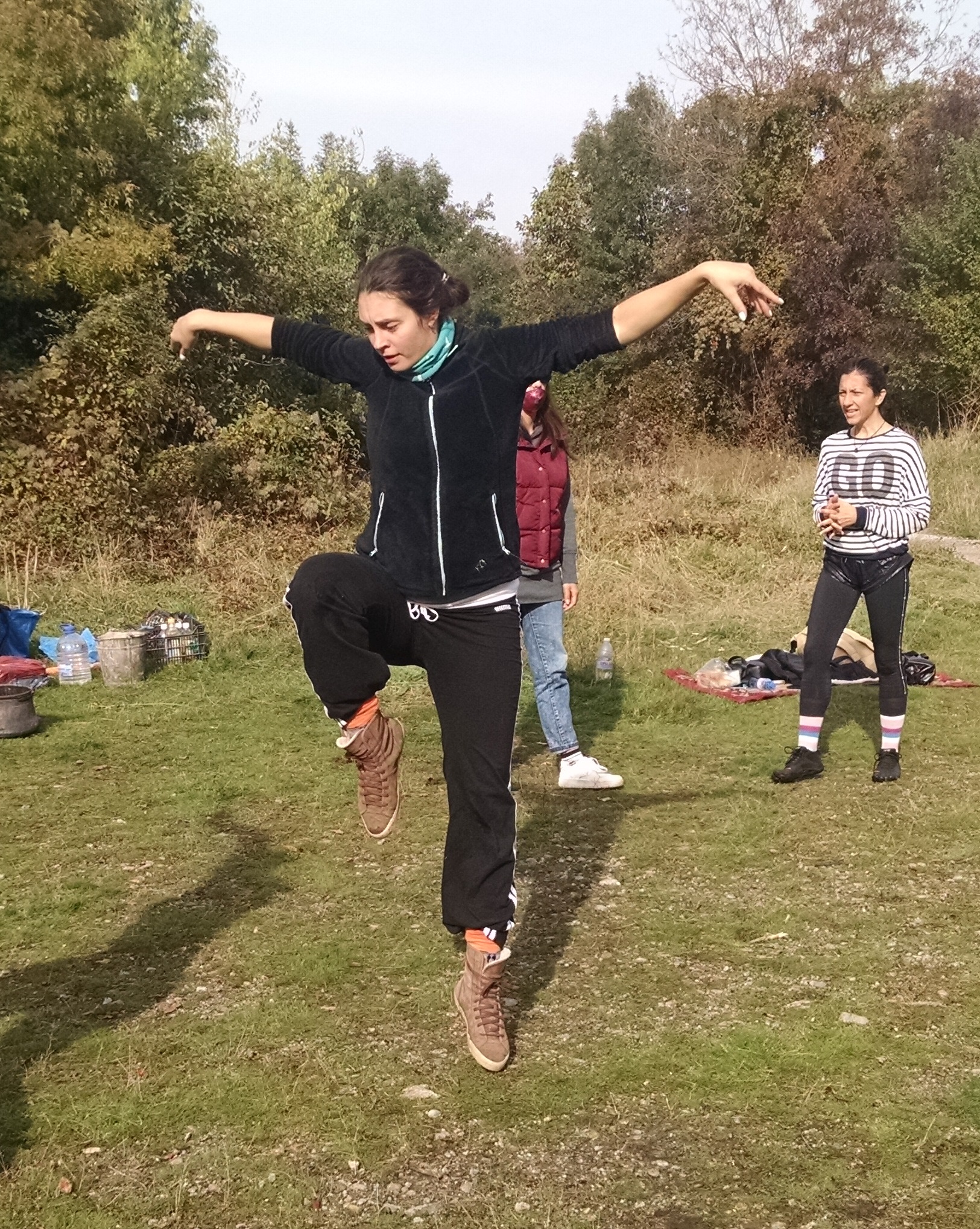 The show Megale Tea by six Bulgarian actresses from Skrin is going to wow the visitors of 6fest Street Art Festival in Plovdiv. Their pagan dance extends the limits of the creative. Partly due to thorough ethnographical research and professional choreography, partly owing to the great effort of the dancers and creative director of Skrin Daniana Koeva (in the main photo during a rehearsal) who is going to dance being 8-month pregnant. Several weeks ago another dancer was performing Mega Tea being also 8-month pregnant.

The actors push their limits, and they hope against all the odds that the 6fest crowdfunding campaign will gather enough money for their salaries.

‘In the performance, I am just one of the five actresses who represent various manifestations of Megale Tea, the mother goddess of the Thracians, – said Daniana. – She was famous for performing female roles to keep the family hearth. According to the ethnographical research we carried out, in different regions of Bulgaria, people worshipped just to some features of the Goddess that made sense for certain communities. Under the guidance of our director Andjey Soyka we created a collective image of Megale Tea, and combined those features’.

The travelling theatre Skrin is a small group of creative professionals from diverse regions of Bulgaria. They all share a passion for mixed art forms – puppetry, drama, circus, dance, as well as the belief that art exists to make us better and spiritually developed beings.

For three years of its existence, the theatre has been working in the tough conditions of the free cultural sector of Bulgaria. And their participation in 6fest Street Art Festival will be the Skrin’s biggest achievement so far, the first appearance before the wide audience.

Of all the creative projects, the family performances of the travelling theatre are particularly successful and popular both among the Bulgarian spectators in the country and abroad. Last year the Bulgarian Diaspora in German cities invited Skrin to perform for their children born in mixed Bulgarian-German families.

Another Creative Initiative by Skrin

Such an appreciation for their art encourages Skrin to explore new means of creative expressions. And they have already presented to the Bulgarian Ministry of Culture their new initiative. It represents a series of unique performances based on local myths and traditions for all the six folklore regions of Bulgaria.

But the difficult bureaucratic procedure that lucks logic and clarity has suspended their plans for an unidentified term. This is complicated by very few possibilities to make living for independent artists in Bulgaria.

‘Art is hard work, and the artist has the right for a decent wage, – states Daniana Koeva. – The fact that his work does not contribute to the material, but the spiritual life of man should not be a reason for underestimating. We’ve played for a very modest fee, we played for nothing, in the name of a cause, for an idea, for a colleague… It’s great that the Ministry of Culture has allocated money for this project. But it’s unacceptable to half it and excuse with the artists’ to “inflate” their fees. The way they, maybe unwittingly, do it twist our hands is awfully offensive’.

…The concept of Megale Tea has struck me by the precise and creative replication of the mundane life of most women who strive for self-expression. Every day they succeed in combining different roles to support their families and contribute to the cultural development of their communities. But their achievements are often taken for granted.

Particularly in such patriarchal societies as Bulgaria that has been struggling for a long time to eradicate bureaucracy and low support for female creative initiatives. Centuries ago, multitasking was the main feature of goddesses that gained them respect. Now, this is simply an integral feature of female life that is becoming a modern form of exploitation of those who are willing to do more using their talents but cannot get through the clutter and summon up the necessary support.

It’s realistic to change the situation if those who share similar beliefs, make a small contribution to support Skrin and donate some money for the 6fest crowdfunding campaign devoted to gathering money for salaries for the participants, the seven fire formations that do outstanding work to develop the cultural heritage in Bulgaria and enrich the European cultural diversity.

This post is part of #6festhotweek, a communication campaign an ethnographic study I launched in support of the 7 Bulgarian fire art-group, the participants of 6fest. More details are on my Facebook and this, this, this and this posts.

First Firestep with Theatrical Lyrics to 6[…]

Fireter Will Show Fairytale about Harmony […]